In 1975, a friend suggested a trip to northern Botswana to search for the legendary Hambukushu and Bayei baskets, well-known and considered to be among the finest baskets in the world.

A life-changing safari was the result.

A safari that took me from Durban to Mutare in Zimbabwe and then to Maun in Botswana. We were meant to spend a few days in the delta and a few days in Maun. However, Maun ran out of fuel for 2 weeks – which resulted in us staying in a rudimentary camp and waiting for the situation to change. There were also no telephones in Maun back then, so we waited for an aeroplane to fly overhead before rushing to the tiny aerodrome to see who was on the flight. 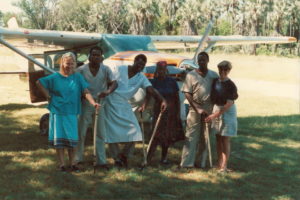 Not only did I find exquisite baskets, but I found a wilderness area and people who have fascinated me ever since. In 1990 I returned to the Okavango Delta to manage a safari lodge called Delta Camp. Living on an island across the river were some very talented basket weavers who used to sell their baskets to the camp shop. Once it was time to move on, I was inspired by the creativity of this wilderness area and the artistic gentleness of the women, to start a business which could market these baskets to the world. 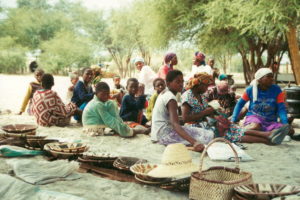 Thus the traditional baskets of northern Botswana, using ilala palm leaves and only vegetable dyes, were the very first products of the newly launched Design Afrika in 1995.

25 years later, Design Afrika proudly boasts an offering of over 300 different baskets from more than 20 countries across the continent. I have had the privilege of many more adventures to meet some exceptionally talented people, to bring back their superb baskets and to develop new ones through intensive workshops. 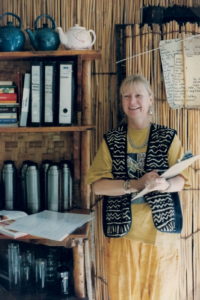 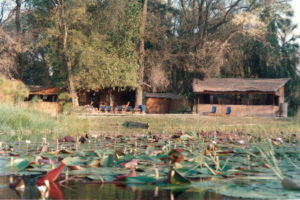